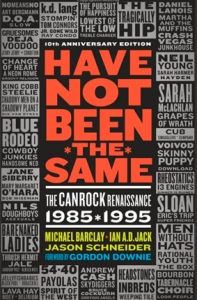 Have Not Been The Same: The Canrock Renaissance (1985-1995) chronicles the decade of the rise of independent record labels, college radio, CBC’s Brave New Waves and Nightlines and how these factors emerged to form a rich network for Canadian independent music.  The nearly 800 page social history of Canadian indie music during this decade is packed with great stories from artists and rich background on the growth of unique regional music scenes.  It was particularly great to read about early 90’s Halifax bands (Eric’s Trip, Sloan, Thrush Hermit, Hardship Post) that forged a fantastic independent music culture in Canada’s East.

The most notable section of the book was the insight into the role of late-night CBC radio programming and the crucial role it played in both pushing the boundaries of radio programming.  Shows like Brave New Waves and Nightlines were my late-night music & culture schools throughout my teenage years and well into my 20s and played a vital role in shaping my cultural sensibilities.  It was a treat to read about the behind the scenes challenges and creativity at play in these essential radio shows.  Here are some excerpts:

From 1984 to 2007, lucky listeners who stayed up late at night exploring the boundaries of their of their FM radio dials were likely to stumble across the signal from CBC Radio Two ( then called CBC Stereo ), and suddenly find themselves part of a strange new world of creativity and eclecticism. It was a place where John Cage and the Dead Kennedys co-existed, where a 7″ single by a Fredericton garage band would be heard in the same hour as an electro-acoustic composer from Montreal.

Wisdom says, “When you’re broadcasting in the middle of the night, you get people who really do listen and really do care about music, other than casual listeners who might just have it on in the car. The time of the night is really important for that. I do think we played the best music available and found new stuff that other radio stations would never, never broadcast.”

One of the most integral elements of Night Lines’ appeal was its ability to make the listener feel like a part of a community. Brave New Waves was much more professional and occasionally professorial, whereas Night Lines simply sounded like a bunch of nerdy record geeks hanging out at home on the weekend. Wisdom relied on his audience to help create the atmosphere of the show, with the help of an answering machine. He recalls, “I would ask the listeners to not just request something, but they had to answer a skill-testing question as well: recite a poem they just made up, tell a joke or answer a tough question or something. It was amusing, but I’d also learn a whole lot about what was going on in different cities by what they’d request. Then I’d go out and try to find it.

The response was overwhelming, and Wisdom’s limited technology of the day couldn’t keep up. “It was so big that I had to shut it down after a few years because I just couldn’t keep up with it,” he says. “I would put in a 90-minute tape, because this was done before any digital equipment, and it was just an answering machine with a cassette running around. I’d have to come down in the middle of the night to turn the tape over. It was always filled. It broke a lot. And sometimes it “broke” just because I couldn’t face listening to hours of phone calls! But it was great, and it was part of what made the show really interesting.” Some of the repeat callers, like Vicki from Surrey and Gilbert from Transcona, would be as integral to the show as Wisdom’s regular weekly feature “10 Singles in Alphabetical Order,” taken from his collection of thousands of 45s.

Wisdom also invited the audience to write theme songs for the program, inspiring four-track weirdos from across the country to submit their work, such as Norm from Richmond. The most prolific Night Lines composers were the Ween-ish Maurice Pooby from Cortez Island and a woman named Eve Rice, from Winnipeg, who also fronted a band called Vav Jungle. More well-known bands also recorded material exclusively for Night Lines, when the show picked up on Brave New Waves’ lead and started recording sessions at the CBC Vancouver studio in 1991. Between then and the show’s demise in 2007, over 60 bands were captured; the last session was the Rheostatics, which aired on the show’s final broadcast on August 30, 1997, and was later released on DROG records. They became the band that started the Brave New Waves sessions and closed the Night Lines sessions. “I loved that,” enthuses Wisdom, who had been one of the Rheostatics’ biggest champions since their debut album. “The session made me think that [ Night Lines ] had a purpose to it and had been worthwhile and was a part of something going on in Canadian music.”

At such a self-conscious institution as the CBC, perhaps it’s surprising that Night Lines lasted as long as it did. “Brave New Waves and to a lesser degree Night Lines were considered just way, way out there,” says Wisdom. “Brave New Waves got away with it earlier because it had a certain academic cachet. They played what was considered art music. It had a more serious tone to it. I sort of slipped through the cracks for 10 years. They knew I was there; they knew I was getting good response. Basically, nobody said a word to me for 10 years. They just let me do it. It was the best job I ever had.”

Update: November 20, 2013 | Collecting more of these archives on my Radio Program Archives page.