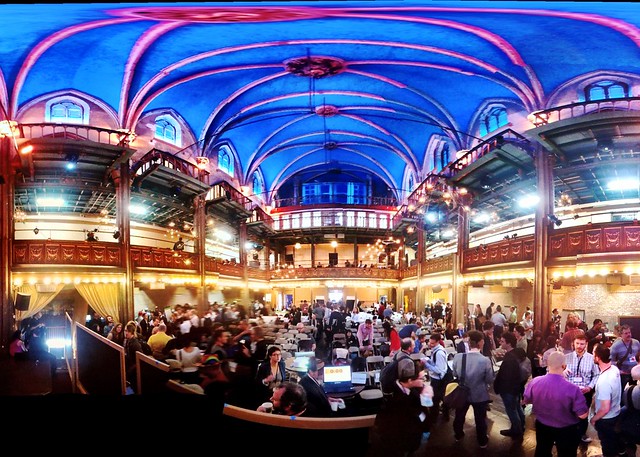 Contact is a working festival of innovation where the net’s leading minds and entrepreneurs can connect with the people who are building the social technologies of tomorrow. The net of the future will not be fueled by ads, but by people solving real problems through distributed, peer-to-peer solutions.

More festival than conference, Contactcon is easily one of the best ‘conference’ experiences I have ever had.  The day started with ‘provocations’ – short 5 minute talks from attendees with the intention of stirring interest and enthusiasm for wide ranging topics such as: effective use and design of distributed networks for activism, alternative currencies, internet privacy and censorship, new approaches to consensus decision making.

Much respect and thanks to Douglas Rushkoff for shepherding a diverse group of bright, creative, enthusiastic people dedicated to leveraging resources both technical and human to reclaim use of communication systems from commercial interests to better serve the human condition.

The ‘scheduling’ portion of the session MC’d by Rushkoff resembled a Northern Voice MooseCamp but struggled to get momentum as many of the attendees had difficulty clearly articulating their action item(s) for their areas of interest. Once all of the items from the crowd were addressed – topics were distributed in 3 time slots throughout the day resulting in as many as 20 meetings/groups convening at any once time throughout the absolutely fantastic Angel Orensanz building – the former Ansche Chesed Synagogue.  Although there is a conference wiki, and forum, I am finding the best followup space for these wide ranging sessions to be the Google group that has been fairly active for the last few months. 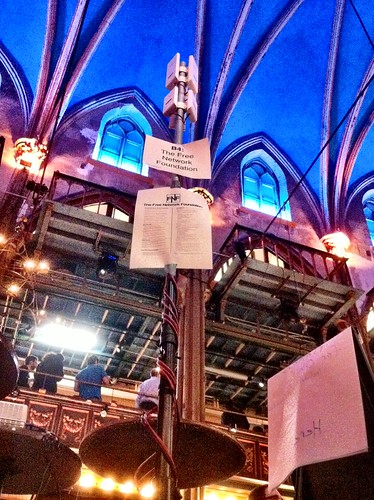 I appreciated how these sessions were setup to be porous and use open space to encourage attendees to drift and linger in the discussions.  The session that I lingered in the longest was led by Isaac Wilder – engineer and member of The Free Network Foundation.  This discussion centered on how to build a F/LOSS p2p physical network layer capable of scaling to a municipal level – essentially establishing a cooperative capable of serving as an ISP to members.  The aim of this project is to work with like minded projects to establish a federation of municipal networks to serve as a building block for a self-governing network on a global scale. Employing mesh networking, their system is called MIND (Mesh Interface for Network Devices) and provides internet and communications services to the occupiers at #occupywallstreet, internet services to the town of Grinnell, Iowa, and a number of other nodes in the USA.

During this conversation the dizzyingly brilliant  The Doctor  chimed in on the conversation with insights and observations of mesh protocols and RF specs and updated us all on his project – Byzantium.  The goal of Byzantium is to develop a platform allowing users to easily use their own hardware/devices to “employ mesh networking protocols, wireless networking technologies, and decentralized (or less-centralized) alternatives to internet addressing/naming systems such as DNS. In designing the system, we aim to reduce the dependency on exotic hardware or skill sets so that the system can be deployed quickly and easily by average internet users.”   The Free Network Foundation and Byzantium are talking and collaborating – I expect amazing things from these people and will be participating any way I can to learn and support their projects. 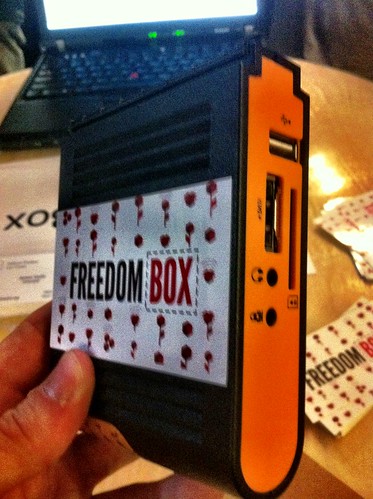 The conference Bazaar provided a great opportunity for people to setup small tables to share and demo their projects and was my favorite part of the day – lots of energy and buzz on the floor with plenty of time for people and projects to find each other. I was thrilled to get an opportunity to talk tech with James Vasile of the Freedombox project during the Bazaar.  Freedombox integrates privacy protection on a relatively inexpensive plug server providing encrypted voice and text communication, anonymous publishing, social networking, media sharing, and (micro)blogging.  Think of this project as a networked extension of the Piratebox.  Oddly enough, the Freedombox project came up during a great conversation [mp3]  @jimgroom and I had with @daviddarts later that afternoon where he gave us the background on his Piratebox project and updated us on the initiatives of the Software Freedom Law Center.

James and I talked specs of the Freedombox and I learned that their developers are recommending and developing the project using the Globalscale Dreamplug due to its range of hardware options and performance capabilities.  We talked VoIP, Asterisk, and PBX for a while and I got some insight into Freedombox’s plans to use XMPP as an open-source alternative for voice messaging.  There are plans to develop capacity for audio streaming with TinCanJukebox and MPD – something I will most definitely be keeping an eye on as a means to distribute something like #ds106radio on a mesh network.

The considerable stack of homework, ideas, and reading arising from Contactcon will keep me happily busy, building, breaking, and tinkering for months.  Hearty thanks to everyone that made it possible.