Skip to content
I spent my Sunday at the Dalhousie Student Union building at TEDxNovaScotia today along with nearly 400 other people taking in some ideas and music.  I caught wind of this event back in early February and dithered about going.  I have been regarding the TED format and phenomenon a little differently after thinking on some critiques and insights from friends like D’Arcy Norman’s I won’t be going to TEDxYYC and Brian Lamb’s  “a particular innovation feel…” and regarded this event with some scepticism, but … on the same hand … this TEDx event was organized and executed by student volunteers, some of my favorite people have lit up the TEDlights, and sometime presentations just Doot Doola Doot Doo It Yourself – so I ponied up the reasonable $25 fee and found my way to the SUB.

I won’t give a blow by blow of the the entire event, but here are a few notable pieces that captivated me:

Audacity vs. Austerity: The New Struggle for Innovation in Higher Education

Robert Huish is a a professor of International Development at Dalhousie University who has incorporated brilliant elements of service learning in his undergraduate courses.  An interview on CBCRadio last year touches on many of pieces he addressed in his talk.

The Debt of Creativity 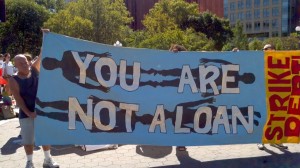 Max Haiven is an artist, postdoc with the NYU Department of Art and Public Policy, and an Adjunct Faculty with Nova Scotia College of Art and Design – Historical and Critical Studies.  Max spoke brilliantly about projects he is involved with: Strike Debt, Radical Imagination Project, and wasn’t shy to show his support of arts education and NSCAD.

Ben Caplan and the Great Yawp 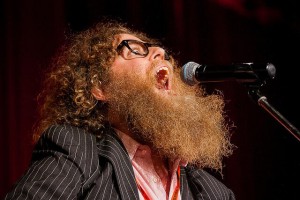 I too am not a bit tamed, I too am untranslatable, I sound my barbaric yawp over the roofs of the world.

Hailing from Hamilton, Ontario, Ben Caplan put down his pegs in Halifax a few years ago and forged his joyful noise within the crucible of the city’s musical talents.  Amidst one of the 3 songs Ben played he led 400 people in a primal scream exercise … it sounded like this: