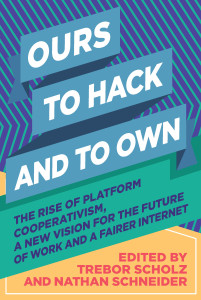 I’ve been nibbling on the concept of platform cooperativism for the last few months, but it was a comment from Hal Plotkin who mentioned it during the #opened16 FutuOER: Designing the Next Generation of Open Education session that prompted me to grab a copy of Ours To Hack And To Own.

I have been spending time with the notion of platform cooperativism to get a sense of how it can inform the work I am involved with in British Columbia with the BC Open Educational Technology Collaborative.

Although encouraged by many of the the ideas and directions outlined in the collection of essays, I have some reservations around the enthusiasm in these essays for emerging technologies like blockchain and cryptocurrency as useful economic tools in these systems.  Still mulling these ideas around while looking for potential gatherings of #platformcoop folks in Vancouver in 2017.  Looks like plans are already in place for a #platformcoop gathering in London in February for https://2017.open.coop/.

Among some of my highlights from the book:

The most valuable networks, however, are those that facilitate group affiliations to pursue shared goals—which is to say, networks that are treated like commons.

From open access platforms to managed digital commons: that is one of the chief challenges that network-based peer production must meet if we are going to unleash the enormous value that distributed, autonomous production can create.

Platform cooperativism will not come about simply through a few killer apps; it will require a different kind of ecosystem—with appropriate forms of finance, law, policy, and culture—to support the development of democratic online enterprises.

Platform cooperatives—as a direct affront to the platform monopolies characterizing digital industrialism—offer a means of both reclaiming the value we create and forging the solidarity we need to work toward our collective good.

The idea of disintermediation was central to the emancipatory visions of the Internet, yet the landscape today is more mediated than ever before. If we want to think more about the consequences of an increasingly centralized Internet, we need to start by addressing the cause of this centralizing. The Internet was colonized by capitalist platforms; centralization is required to capture profit. Disintermediating platforms were ultimately reintermediated by capitalist investors dictating that communications systems be built to capture profit.

By keeping the computational capacity in the hands of the users, we prevent the communication platform from becoming capital, and we prevent the users from being instrumentalized as audience commodity.

In this sense, many open platforms are not so benign. Many of them are techno-economic fortresses, bolstered by structural dynamics that enable dominant corporate players to monopolize and monetize a given sector of online activity. Market power based on such platforms can then be used to carry out surveillance of users’ lives; erect barriers to open interoperability and sharing, sometimes in anti-competitive ways; and quietly manipulate the content and experience that users may have on such platforms. Such outcomes on seemingly open platforms should not be entirely surprising; they represent the familiar quest of capitalist markets to engineer the acquisition of exclusive assets and mine them for private gain. The quarry in this case is our consciousness, creativity, and culture. The more forward-looking segments of capital realize that owning a platform (with stipulated, but undecipherable, terms of use) can be far more lucrative than owning exclusive intellectual property rights for content.

Cooperativism is not simply shared ownership, as are many employee-ownership plans. It is, first and foremost, shared governance.

In cooperativism, as with commons-property-regimes, it will be important to clearly define who members are, and place a higher barrier on membership than peer production has done. This is so partly because the quality and timing of outputs will be more critical, and partly because of the need to maintain a reasonably defined universe of participants among whom returns sufficiently high to make a real contribution to their livelihood must be shared.

First, platforms are us: Platforms aren’t just software applications and the companies that administer them. What gives a platform value, in most cases, is the community of users that employ the platform, along with the networks, data, and ideas they create. In other words, what makes platforms so valuable is what we put into them. Second, platforms don’t need to be treated as commodities.

In any of these cases, membership is meaningful, equating to ownership and control over the entity. A platform that doesn’t actually consider at a granular level the question of membership, its members’ needs, and their relationship to the cooperative—one that uses “cooperative” as some sort of trust mark not backed by actual cooperative structures—runs the risk of simply being part of the problem.

Platform co-ops can succeed at building privacy-positivity and basic decency into products and sell this as a competitive advantage against venture capitalist-backed tech companies that lack such qualities because they practice what is increasingly recognized as surveillance capitalism, the extraction of our data to modify our behaviors at scale.

Platform cooperatives resist the extraction of profit that only benefits the few by promoting systems that focus participants on forms of sharing that can enhance the sustainability of everybody in that ecosystem.

Commons are sometimes considered tragic because of the asymmetry between individual and collective cost and benefit. An individual might take the risk of exploiting a common resource because the individual benefit is great, whereas the cost—distributed across many other people—may not be noticed—unless everyone else similarly exploits the resource. Because of this asymmetry, commons need to be negotiated through conventions that are actively maintained. Cooperatives formalize this need to protect the commons.

Commons-based peer production, a term coined by Yochai Benkler, has brought about a new logic of collaboration between networks of people who freely organize around a common goal using shared resources, and market-oriented entities that add value on top of or alongside them. Prominent cases of commons-based peer production, such as the free and open-source software and Wikipedia, inaugurate a new model of value creation, different from both markets and firms. The creative energy of autonomous individuals, organized in distributed networks, produces meaningful projects, largely without traditional hierarchical organization or, quite often, financial compensation.

To a greater degree than traditional cooperatives, open cooperatives are statutorily oriented toward the common good. This could be understood as extending, not replacing, the seventh cooperative principle of concern for community. For instance, open cooperatives internalize negative externalities; adopt multi-stakeholder governance models; contribute to the creation of immaterial and material commons; and are socially and politically organized around global concerns, even if they produce locally.

How, then, does the concept of platform cooperativism relate to the notion of open cooperativism? Cooperative ownership of platforms can begin to reorient the platform economy around a commons-oriented model. We highlighted six practices that are already emerging in various forms but need to be more universally integrated. We believe that a chief ambition of fostering a more commons-centric economy is to recapture surplus value, which is now feeding speculative capital, and re-invest it in the development of open, ethical productive communities. Otherwise, the potential of commons-based peer production will remain underdeveloped and subservient to the dominant system. Platform cooperatives must not merely replicate false scarcities and unnecessary waste; they must become open.

One fundamental challenge for the development of such a theory of value is the inadequacy of monetary metrics as proxies for value production, since part of what peer producers create, exchange, and consume does not pass through monetary exchanges.

What we have shown so far is that platform ownership models do not only determine governance but also influence the capacity to generate value. This should be considered when peers or policy makers decide what kinds of platforms they are going to build or promote. According to our analysis, platform cooperativism will further not only self-governing processes but also the capacity for people to create resources and services that garner a good online reputation.

Investing public resources for piloting innovative, cooperative platforms is necessary to enable credible alternatives to the current data paradigms exploited by the dominant platforms—integrating economy, technology, society, and policy, which would otherwise remain fragmented and lead to market concentration and regulatory breakdowns.

We are not going to be able to improve welfare, health, youth employment, education, and the environment by leaving the market to do it on its own.