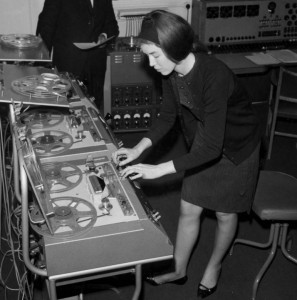 With all of the chatter online about the 50th anniversary of Dr. Who I decided to rustle up a few episodes to watch with the kids to see what they would think of the story and characters. As it turns out – they love it!   While digging for episodes and backstory I re-discovered the role of the BBC Radiophonic Workshop in the music and special effects of the series.  The engineering, artistry, and pioneering work of electronic music from the BBC Radiophonic Workshop is astounding.  The more I read, the more I encountered the name and works of Delia Derbyshire – musician and composer of electronic music & musique concrète.  Delia played a critical role in the composition and visionary audio engineering in the Radiophonic Workshop and is responsible for the arrangement and composition of the iconic Dr. Who theme.

This radio documentary exploring Delia’s work was produced by BBC Radio4 in 2010.

It appears the Radiophonic Workshop has been given a new life – looking forward to hearing what will emerge from the rebirth.

Have a listen to her 1965 piece of radio art from Inventions for Radio entitled The Afterlife below and check out some of her other works at Ubu.