Skip to content
Put some time aside this weekend to finish my reading of We Make The Road By Walking and caught up with fellow readers’ commentary from the past couple weeks.  So many great things coming out of this insightful group, like:

An emergence of Antigonish 2.0  via: @bonstewart

Some of my highlights from Chapters 3-6:

Academicians, politicians, all the people that are supposed to be guiding this country say you’ve got to be neutral. As soon as I started looking at that word neutral and what it meant, it became very obvious to me there can be no such thing as neutrality. It’s a code word for the existing system. It has nothing to do with anything but agreeing to what is and will always be-that’s what neutrality is. Neutrality is following the crowd. Neutrality is just being what the system asks us to be. Neutrality, in other words, was an immoral act … Of course, when I got more into thinking about educational ideas and about changed society, it became more and more obvious that you’ve got to take sides. You need to know why you take sides; you should be able to justify it.

Starting from people’s experiences, and not from our understanding of the world, does not mean that we don’t want the people to come with us in order to go beyond us afterward. This movement for me is one of the many important roles of a progressive educator, and it is not always so easy.

Conflicts are the midwife of consciousness.

… one of the virtues we have to create in ourselves as progressive educators is the virtue of humility.

We concluded that reform within the system reinforced the system, or was co-opted by the system. Reformers didn’t change the system, they made it more palatable and justified it, made it more humane, more intelligent. We didn’t want to make that contribution to the schooling system. But we knew if we worked outside the system, we would not be recognized as educators, because an educator by definition was somebody inside the schooling system. Nevertheless, we decided we’d work outside the system and be completely free to do what we thought was the right thing to do in terms of the goals that we set for ourselves and the people we were working for.

Low periods are a good time to work out the techniques and ways of involving people, ways of having people begin to use critical judgments.

“Those who refuse to share their knowledge with other people are making a great mistake, because we need it all. I don’t have any problem about ideas I got from other people. If I find them useful, I’ll just ease them right in and make them my own.” 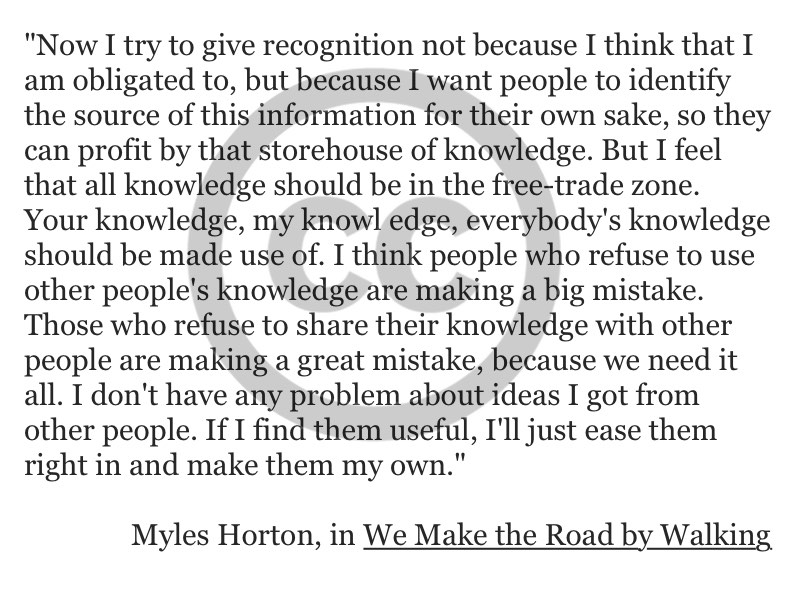